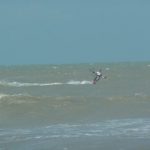 Prea is THE place to kite surf!

After a few disappointing trips to Cabarete over Thanksgiving and late December where I was cursed with only 1 day of wind out of a combined 10 days there (granted it’s not the windy season there), I was looking forward to a change of kiting scenery.

As my fantastic baby brother Olivier lives in Sao Paulo where he runs marketing for BrandsClub, the Gilt equivalent of Brazil and was loth to travel, I searched for kiting options in Brazil. I chanced upon an article on Prea online and decided to take the plunge. We booked a trip from December 24 to January 1 at Vila Prea.

I was extremely apprehensive upon arrival. Prea is hard to get to. You fly into Fortaleza airport (FOR) and drive for 4 hours seemingly to the middle of nowhere. In the process you cross extremely poor towns and neighborhoods. The arrival in Prea was barely more reassuring as it was only marginally better than the towns we crossed on the way. Fortunately in the last 5 minutes of the ride, you reach a beautiful sand beach with amazing bungalows: Vila Prea.

The place exceeded all my expectations. They have not had a single day without wind since the beginning of the windy season in July (the season lasts from July to January). There was constant wind every single day from 11 am to 6 pm! The managers and staff are extremely friendly and helpful. The bungalows are great and have free wifi. The nearby town of Jeri is also extremely cute. The upside of how difficult it was to reach the place was that there was almost no one there! I never saw more than 10 kites simultaneously on the water. By comparison, on Cabarete I often felt I was stuck in traffic at rush hour!

I had a blast! I learned to jump and did my first back loop. My ardors were only tempered by my left knee and an upset stomach which seemingly did not appreciate all the sea water ingested in the process of learning to do a back loop.

Given how far Prea is, Cabarete will remain my first port of call for a long week-end of kiting given its direct 4 hour flight from New York, but for extended kite trips, Prea cannot be beat!

I will be back!